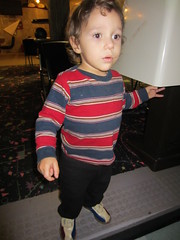 Is that going to be a strike?!?!?!
Originally uploaded by Paul Timmins.

Just an update for the people who don't follow me or billy on the firehose of crap that is facebook, or on my flickr based bithose (accessible by poking around on the links in this post).

Billy is 2 years old as of September 30. Hard to believe it. Here's a cute picture of him in bowling shoes doing his best to play bowling with us, at age two.

Besides a "severe auditory processing delay" and a "severe speech delay" (for which he starts speech therapy next week) he's been relatively healthy (well, he's also allergic to soy and cow's milk protein, which is "interesting" but avoidable).

We've been doing well as a family, and things have been hectic in a good way at work, as we continue to grow furiously.